(Translation of the article in Japanese)

On February 9th, Shohakutei, a Japanese tea-garden guided tour was held. We felt the arrival of spring in the sunlight, even though there was still a chill in the air. This was the fourth time the tour has been held. The park sponsor requested to join us, the KSES members, due to their intention to strengthen support for foreigners. KSES also secured the cooperation of Ms. Sekine, who works for Tokyo University International Support Office and takes care of foreign students including foreign researchers. In the end, three foreigners and three Japanese people participated in the tour. There was one person who had no choice but to withdraw from the tour, however, as a result of having to attend an urgent academic conference.

After the opening speech by the park stuff, we started the guided tour. There was an authentic outer-Roji, middle-Roji and inner-Roji. We walked across the steppingstones preventing from the moth area and proceeded to Koma (the Small room), then crouched and entered the room through Nijiriguchi (the crawling entrance). The guests were all ears when the explanation of the architectural style peculiar to the tea-room was given. After returning to the large room, they were each served matcha tea in turn. In the tranquil atmosphere they were watching the host’s every move with intense concentration as she was making tea. The host suggested that they relax, so they enjoyed their tea while stretching out their long legs. After drinking the tea, they learned and practiced the basics of making tea. A Russian lady, who herself made matcha tea at home, eagerly asked about the proper temperature of the water. Mr. Ohno, who belongs to KSES and also a Zen monk, brought a hanging roll of “Ichi-En-So” (One Circle Phase), which he drew with black ink; he proceeded to explain the idea of Zen. The guests were intrigued by his lecture and rushed to ask so many questions that we had to refrain from calling it a day. Soon after, we all went out to the Tsukimidai (Moon-Viewing-Terrace), where red and white plum blossoms had bloomed on both sides and took commemorative photos. All of the guests were reluctant to leave, but enjoyed this taste of Japanese culture.

We at KSES also learned more about a part of our native culture, which we had needed to understand more deeply. We will keep improving for future activities held in English.


(Translation of the article in Japanese)

On November 15, we at KSES members guided the tearoom “Shohakutei” with a few Kashiwanoha Park staff. “Shohakutei” is an authentic tearoom which has an excellent front gate based on the middle gate of “Kankyuuan”, a famous tearoom in Kyoto. The participants were international students at the University of Tokyo’s Kashiwa Campus from Austria and Russia.

We passed through the three-part Roji toward Nijiriguchi (a crouching entrance), full of the spirit of one of the tea masters, SEN-No-Rikyu. Towards the end of the tour, we returned to Hiroma (a large room), which faces a Japanese garden, and enjoyed matcha tea with wagashi.

They enjoyed very well with our two hours guided tour. Excerpts from the SLF-Tsushin (Monthly Newsletter) 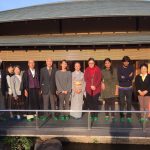 The SHOHAKUTEI guided tour in English on 3/15/2018 finished. Article of the Shohakutei Guided tour